Hi everyone, it’s Maki here again. This is my first post on this blog in a few weeks, so let’s hope I can make this at least a little interesting to read.

These days, with fuel price and the prices of so many other things on the rise, many people are turning their attention to cost-efficient small cars. In fact, there are so many small hatchbacks in Japan today that it’s practically impossible to keep track of all their names.

And actually, these cars actually make a lot of sense: most of them can seat up to 5 people, carry luggage in the back (albeit not very large ones), require a refill only once in a blue moon, can effortlessly conquer narrow roads, and most importantly, will get you where you want to go. So, unless you need to drive on muddy hills, carry tons of luggage or have a large family, there is no need to own a big car; for many people, a small hatch can be just the kind of car they need.

Let me show you a few examples of popular small Japanese cars that are commonly found in stock at Autocom Japan. (To see the entire stock list click here)

They are all good, reliable machines.
My intent today, however, is not to show you every little detail of these cars to show you how good they are; I don’t know well enough about them to do that. Instead, I’d like to show you how small cars can possibly get and still be functional as… well, a car.

So which of the cars above is the smallest? To be honest, none of them are.They are, in fact, giants compared to what is known today as “the smallest car ever to go into production”: the Peel P50.

And here’s a photo of it. Isn’t it the cutest thing?

It looks like a cyclops with its single headlamp. Ok, so I have to tell you first that this is NOT a Japanese car, it is 100% British, manufactured by Peel in the Isle of Man during the early 1960’s. (People often say that we Japanese are the best at making small things, but it looks like the Brits have beaten us to it this time)
The car seats only one adult, weighs less than 60kg, and its engine capacity is no more than 49cc.
Instead of writing about this as if I know everything, I should just refer you to its wikipedia article here, from where I got all the info.
I did not know of this vehicle’s existence until I happened upon a video of famed British TV show Top Gear, in which presenter Jeremy Clarkson, who is 6ft5in tall, crammed himself into this tiny little car and drove himself around London. In my honest opinion, it’s one of the best Top Gear features ever, and a timeless classic.

Here is that famous Top Gear video clip for everyone to see:

According to Wikipedia, the Peel P50 can do 100MPG(!!). I’d say that’s more than economical enough for me! Of course, a car of this size is way too small to drive around safely in these days, and I’m sure everyone wants cars that seat more than a single person. Still, it’s interesting to see the kinds of small cars that people have been making decades ago, and how they have changed over the years.

By the way, this little Peel is now a vintage car and costs many, many times more than any of the Japanese cars pictured above. Amazing!

Today, I want to share with you what kind of vehicles my sugar daddy…..oops, my real daddy has owned and driven in his life so far.
I have almost zero memory for his 1st vehicle, but I kind of remember that it was a silver car.
I was too little to remember.

From the second car, I have good memory. It was Mazda Familia in blue color.
As a kid’s point of view, I didn’t like it at all because I felt like my neighbor had a better and nice looking car. sorry, dad…..
We used to visit my grandparents house by this Familia, which is about 100km away from our home.
It was about 2 hour trip, but it was a good trip for me. Nice memory, indeed.

A few years later, he changed to Toyota Mark II. (don’t remember when exactly….)
I was big enough to make a comment on his choice and I insisted on body color.
We settled down on 2-tone body color after all. It was a tough argument in my family.

Then, he switched to Toyota Crown. (again…don’t rememeber when exactly…… sorry)
On this vehicle, I have less memory because I was away most of the time.
Plus, I think he took this car to his apartment in Osaka and Tokyo.
It’s a long story, but he was living away by himself. Don’t worry, this is just work purpose, not getting ready for devorce purpose.

In 2006, he crushed and made this car total scrap.
The car protected my parents and they just did a regular check up. That was all.

Then, he purchased another Toyota Crown right away. Now I know it’s a 2006 year model GRS180 because I ASKED HIM.
When I was in Nagoya (my hometown), I used to drive this car for local activity.
To me, what was interesting on this unit was that there is a system called “voice command”.

I don’t know what’s wrong with me, but usually the system doesn’t recognize my command…..
I had to do it by myself after all……

Dad, please give it to me and get another one. 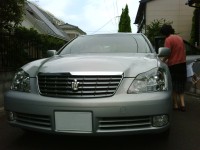